I've already written a bit about our fun experiences on day 4 of our OCFF vacation, but there's a little more to fill you in on... 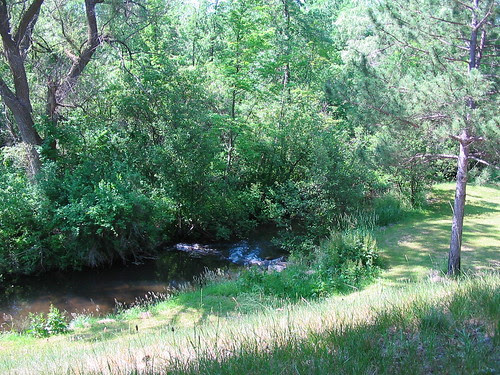 Drug dealers need their rest, so we slept in late again and enjoyed coffee and breakfast outside on the bank overlooking the little stream. B watched the resident snapper amble upstream again, chasing nice brown trout out of his path. He emerged onto the bank and headed up the bank a bit to a nice, sunny resting spot. She called me outside to take a look - he had a big, black, engorged leech stuck to the back of his neck, between his head and shell. Probably a pretty hard place to properly maintain if you're a turtle. I would have loved to help him remove it, but not at the risk of losing my digits. Given where they spend most of their time, I suppose these big, mature snappers have dealt with their share of leeches. He hunkered down on the grassy bank in the warm sunshine. Maybe he was going to drive the leech off by threat of dessication.

We again packed a bountiful lunch and dinner of PB&Js and other tasty sundries in the cooler and headed off for a full day of fishing. We chose to fish the Pine River along the Silver Creek pathway. We'd never fished the Pine before and wanted to check it out. We arrived at the Silver Creek State Forest Campground and were immediately impressed with its well-groomed, neat condition. The Pine is a popular river for paddlers and tubers and the number of liveries in the area give this away. Traffic on the stream on this particular weekday was light. We were passed by only a couple of tubers all day. The river was fairly cold (~58 oF) so we were impressed with their bravery. Ours too actually; but the cold water was a nice feature during such a hot week.

We waded in somewhere in the middle of the campground and B immediately caught 2 nice browns on her black Power Ant. She says that her black-bodied ant works best during daylight hours and at night she switches to tan bodies. The stream here is about 20' wide and 1-4' deep with a gravel and sand bottom and occasional clay spots. The river must flow over a somewhat steep riverbed by Michigan standards. The current is strong for a small stream. The banks are hardwood and pine-tree lined and well-shaded. Once in awhile, retreating to the footpath on the bank was necessary to circumnavigate a particularly deep and unwadable hole.

We took a break for a late lunch/early dinner at a campsite picnic table when we first noticed the redstarts flitting about. We had never seen a redstart before but saw many males and females while we ate and later, while we fished. 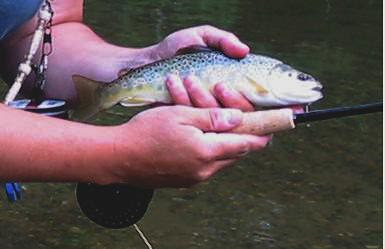 We waded back into the stream at a new location within the campground. I had no luck with B's ant or with lifted or drifted nymphs or with small streamers. A handful of fish started rising to the surface at 7 or 8 pm. I picked out one fish that was feeding on or near the surfade erratically. I watched him as I tied on a Turck's tarantula for lack of a better idea. He'd come up 3-5 times per minute for awhile, then disappear for 2-3 minutes. I couldn't see what he was eating. I casted the Turck's over him and he smashed it immediately. He was a nice little hunky 11" brown. He really thought he could kick my butt. He fought hard in the swift current and tried to wipe me off on a submerged stick. For a dark moment, I though he'd succeeded. He provided a very good challenge for my 3 weight and 5x tippet. I released him and he shot off into the murky depths. I spied 2 more risers upstream. I caught the first one - maybe a 10-incher - and B took a picture. I casted to the second fish, but he would not be fooled. I tried the Turck's on another fish, futher upstream, but he wanted nothing to do with it either. I waded downstream toward B. She had had no luck since the 2 she caught when we first started, but remained optimistic. I was getting chilly, so I headed back toward the car. Along the way, I spotted a nice riser sipping the surface near a canoe put-in and decided to try the Turck's on him. On the 2nd cast, he took it and headed directly to the bottom of his deep seam. I had a hard time moving him even downstream for a moment. What strong-willed little trout in this river! I finally landed him - he was another little 11" football - and released him quickly. The brown trout in this stream have typical big black and red spots but a much more colorful yellow underbelly than the strains in many other systems. We also noted the apparent lack of little fish in this river. Perhaps this stream is managed in such a way that the tiny little fish are simply not a large portion of the overall population.

We quit fishing and packed up our gear at about 9:30 so we could catch some of Game 7 of the NBA finals on TV somewhere. The TV at our cabin recieved 2 channels, but not the one broadcasting the game. We headed into Luther to the Loggers Landing bar. They were showing the game on their big screen, so we ordered a pizza and settled in. In order to view the big TV screen, we had to choose a table next to a table of pretty rowdy, inebriated locals. It was the typical scenario of 3 or 4 drunk men having fun harassing 3 or 4 drunk women. I don't really understand why, but the women were apparently enjoying harassment. One especially drunk older woman repeatedly asked us "if the game was still tied." It was a big screen, anyone could watch or look at the score, but it was clear to everyone that we were the only ones paying attention to it. Each time we answered, yes or no, she informed us that "it doesn't really matter, it's all about the money anyway." Everytime.

The pizza was pretty good and the Pistons lost a nail-biter to the new champions - San Antonio Spurs. Feeling disappointed and a little displaced, we paid our bill and high-tailed it out of the bar back to our comfy cabin. It was a slightly awkward end to a great day on the river.

Stats
Probability of revisiting stream locations fished: 1:1
Pickled ring bologna smackdown: Koegel's over Eckrich
Wildlife sightings: ~30 redstarts, 1 snapping turtle, zillions of butterflies and skippers
Today's Hex Hatch Rating: Huh? What's a hex?
Did I get to use a spey rod? No
Enjoyment grade for the day: A, awesome right up to the end of the Piston's game...

This work is licensed under a Creative Commons Attribution-NonCommercial-ShareAlike 2.5 License.